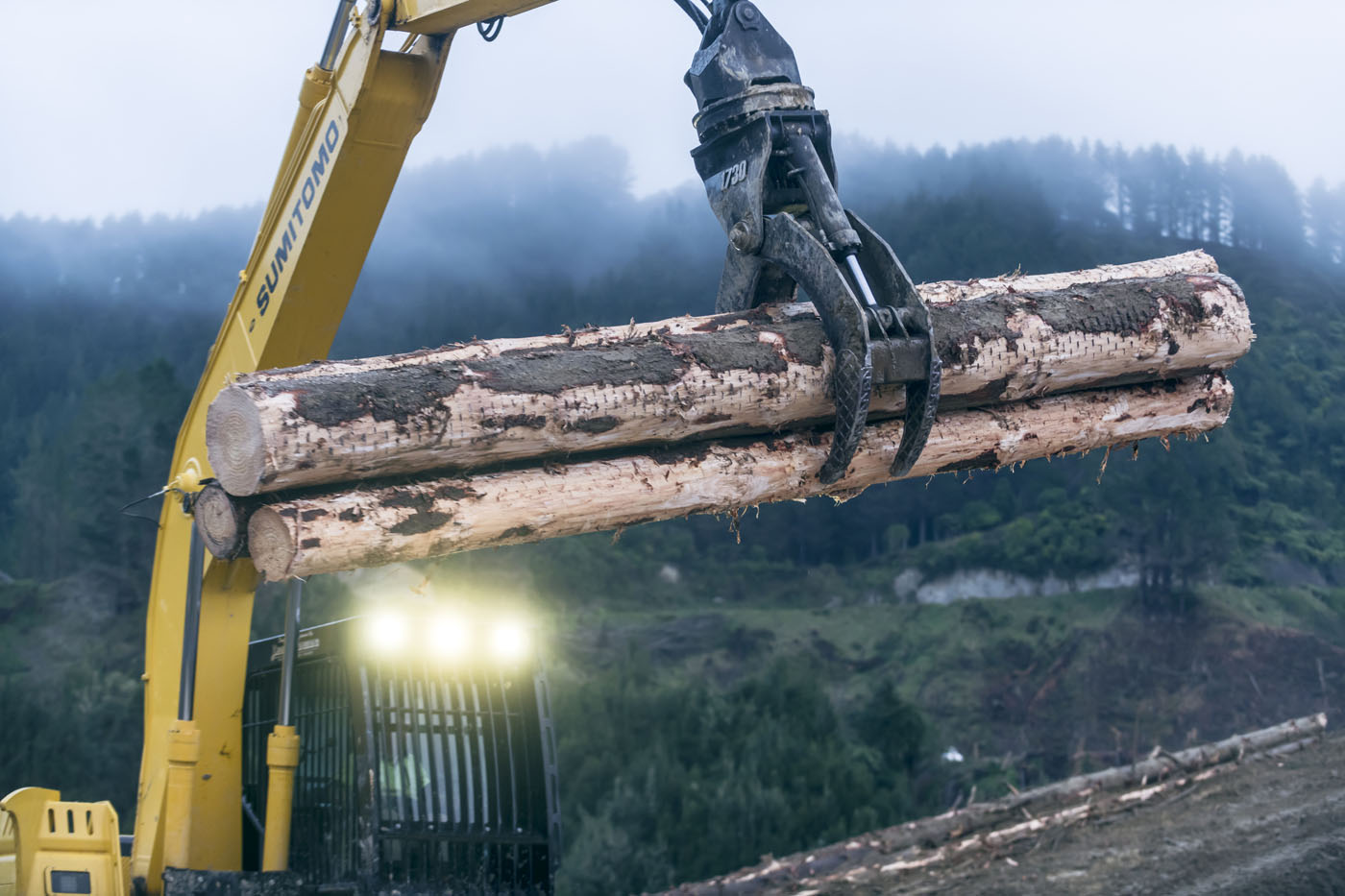 Last month I made the comment that there was some light at the end of the tunnel regarding increases in export log pricing. It appears that the tunnel is quite long; and although we have had a modest lift in pricing of around $10/JAS on average, and we are reasonably confident that the light isn’t a train. We’re unsure yet of what exactly the light is…

The underlying economics of the Chinese construction industry are about as shaky as Robertson’s ‘cost of living payment’ and the news seemingly keeps getting worse. The mortgage boycott by owners of uncompleted apartments in the Evergrande debacle has sent shockwaves through the China Communist Party (CCP). The issue has been the cessation of construction work on these projects as the Evergrande company wades its way through financial turmoil. Mortgage holders have joined forces in protesting local and central governments, which has resulted in the president’s office calling on local officials to ensure these projects are completed; and puts pressure on State owned banks, to finance the completion. In addition, a report by S&P Global Ratings highlights the expectation that China house prices will fall as much as 7% and sales will drop by 28 to 33 percent in 2022. This is all a bit untidy with the Communist Party elections in coming months but does show the level of pressure that homeowners are feeling in China at present.

Throw into the mix the US House Speaker, Nancy Pelosi’s, one-woman crusade to Taiwan last week to basically flick the bird at Beijing on behalf of Uncle Sam and the CCP is probably losing its sense of humour. This is very unlikely to do anything but further destabilize an already very unstable situation. The old adage that “if you are going to kick a tiger in the backside, you’d better have a good plan for dealing with its teeth” comes to mind here and I’m not sure Pelosi, the third most powerful politician in the US, had completely figured out the teeth plan. Anything that increases tensions between China and the West is not likely to be positive for our exports in the medium term.
On the positive side, the log inventory position is slowly reducing in China as supply drops out of NZ, demand is stable but not yet increasing and global supply is almost non-existent. One of the bigger issues in recent months has been vessel wait times in NZ ports which has added as much as $NZ18/m3 in cost. As supply drops and Covid absenteeism tails off in port operations, vessels are getting turned around faster resulting in lower freight rates and, in turn, increased At Wharf Gate (AWG) prices. There seems to be a reasonable amount of optimism amongst exporters in terms of pricing for the next quarter, which is encouraging, however we are unlikely to see a repeat of the 2021 price spike. 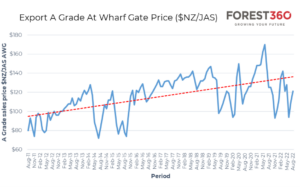 NZ supply isn’t likely to swing back into action for a while yet as the current A-grade price of around $125/m3 isn’t going really going to set a forest owner’s pants on fire, especially with the additional cost of fuel still taking a large bite out of the net return cake. And it’s wet; really wet. Winter is always a good excuse to complain about the weather, but this winter has been especially bad. It was perversely encouraging to hear the media report that we have just had the wettest July on record which made us feel better that our whining about the rain has been justified. We are seeing significant damage around many forests with mass land movements not seen before, roads blown out and continual flooding and slips from land that is now super-saturated. In many of these forests we are having to completely change our way of thinking in terms of managing for 50-year rain events once a month.
Carbon prices jumped back up over $80/NZU in mid-July following the governments’ proposed changes to the NZU auction price parameters. At the $80/NZU level, this gives around $2,200/ha/year in revenue on a carbon regime which gives some significant optionality to farmers who have areas of marginal land. James Shaw has buckled under pressure from Iwi groups around the inclusion of exotics in the permanent carbon scheme and now radiata is back on the table as a permanent carbon species. Maybe the reality has set in that trying to establish native carbon forests at large scale in place of exotics is about as easy as holding onto the Green Party leadership.

Domestic demand for pruned and unpruned sawlogs remains buoyant. Several mills, especially those that rely heavily on private supply, are sailing close to the wind in terms of log supply. This isn’t a factor of the logs being exported, moreover a result of the significant drop in harvest levels. Demand for framing lumber continues to be very strong around the country, however, pruned mills are signaling a reasonable reduction in clearwood demand, specifically from the States, which supports the media reports of a sharp slowdown in residential construction in the USA due to spiraling construction costs (sound familiar?).

So, all in all, August is a bit more positive than July – not that that would be hard. Summer is creeping closer by the day and markets are looking less negative. The light at the end of the tunnel is still shining, lets hope its Jennifer Aniston with a spotlight, not Nancy Pelosi with a lit stick of dynamite.